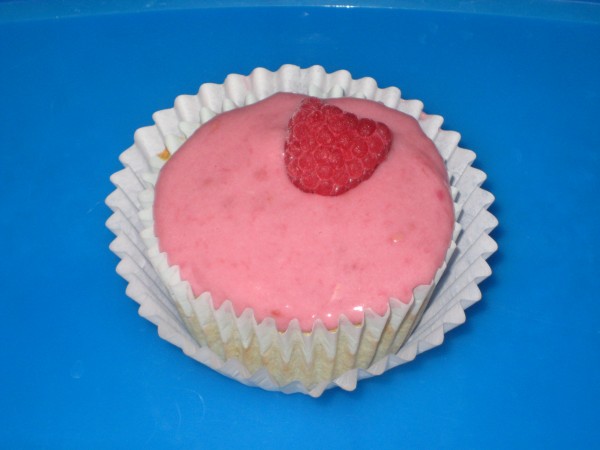 I love watching the Biggest Loser! Did you watch the episode with the cupcake challenge? From that episode they shared a recipe for the 100 calorie cupcakes. Since I love cupcakes I thought it’d be fun to try! Making it was pretty fun. It’s a lot different from making regular cupcakes. I was excited to see how it would turn out. And I think it turned out pretty good. Derek loved it. He loved that it wasn’t very sweet because he doesn’t like things very sweet or can’t eat too much of it. And my dad thought it was really good too. He liked the real raspberries in the frosting.
Just a few of my tips. The cupcakes stuck to the liners on the bottom so I would recommend spraying the bottoms of the liners with non-stick cooking spray. The recipe says it makes about 14; I made 12 but since it doesn’t rise very much I would recommend filling up the cupcake liners 3/4 full. That would probably give you 10 cupcakes. Also, the frosting tasted too much like cream cheese for me so I added some powdered sugar. I know that makes it not 100 calories anymore but it was worth it for me. So if you are like me, I would add a little less cream cheese and a little powdered sugar.
These cupcakes are a yummy healthier alternative for a sweet treat.
Vanilla Cupcakes
Recipe from The Biggest Loser
Ingredients
5 egg whites
Pinch of salt
3 tablespoons honey
2 teaspoons vanilla extract
1/4 cup nonfat Greek yogurt
1/2 cup whole wheat flour
1 teaspoon baking powder

·Preheat the oven to 325F.
·Place the egg whites in a large bowl and using a handheld mixer whip the whites on medium speed for 3 to 4 minutes or until the whites begin to lighten up and hold their shape. (it took longer than 4 minutes for mine to thicken up)
·Increase speed to high and whip in the salt and honey until the whites hold a soft peak, then add the vanilla extract.
·Fold in the yogurt.
·In a separate medium mixing bowl combine the flour and baking powder and mix well.
·Sift the dry ingredients into the egg whites a little at a time, gently folding them in with a rubber spatula.
·Once fully incorporated, scoop the batter into cupcake tins lined with cupcake papers.
·Bake the cupcakes for 15 to 20 minutes or until they have colored and gently spring back when pushed with a finger.
·Remove from the oven and cool the cupcakes at room temp.
For raspberry frosting:
·While the cupcakes are baking, puree the raspberries in a blender until smooth.
·Pass through a fine mesh strainer into a small saucepot and cook over medium heat for 5 to 7 minutes or until the puree reduces slightly. (I don’t have a mesh strainer so I skipped that step and it was just fine)
·Cool completely.
·Place the cream cheese into a medium mixing bowl and fold the puree into the cream cheese until fully mixed.
·Once cupcakes are cool, spread a little of the berry frosting over the cupcakes, garnish each with one raspberry and serve.
« Baked Boneless Buffalo Wings
Apple Cinnamon Bread »