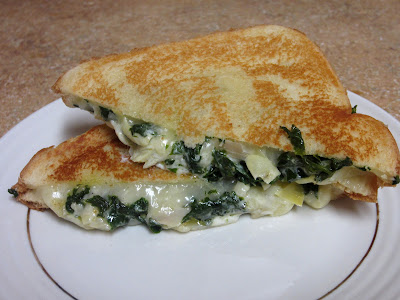 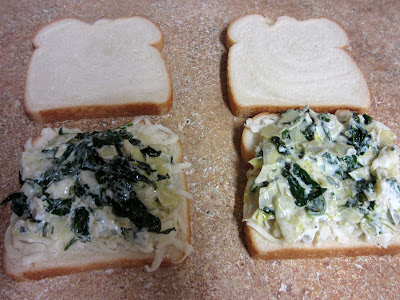 You could use a fancier artisan bread like sour dough but I just use sandwich bread since we already have it. All you do is cook up the garlic and spinach add a tiny bit of Greek yogurt or sour cream and your artichokes then you place it on your bread in between cheese and grill it up. YUM! We will be making these again very very soon!

Directions:
Heat the olive oil in a large skillet over medium heat.  Add the garlic to the pan and saute just until fragant, about 30 seconds. Add the spinach to the pan and stir occasionally, cooking until wilted.  Cook a minute or two more until most of the liquid has evaporated.  Season with salt and pepper to taste.  Stir in the artichokes and saute one minute more.  Remove the pan from the heat and stir in the sour cream.

To assemble the sandwiches, lay two pieces of bread out.  Sprinkle about 1/4 cup of the shredded cheese on each slice.  Top each with half of the spinach artichoke mixture.  Divide the remaining cheese between the two sandwiches and top with the remaining slices of bread.  Melt a pat of butter in a large skillet over medium heat.  Toast the sandwiches, turning once, until golden brown on both sides and cheese is melted. Serve immediately.