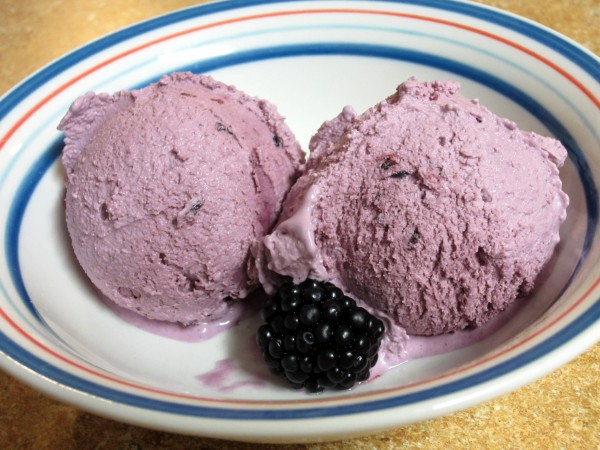 This ice cream is smooth and creamy with a few small blackberry chunks in it. It’s amazing! It has a custard base with blackberry puree and chunks of blackberries mixed into it. 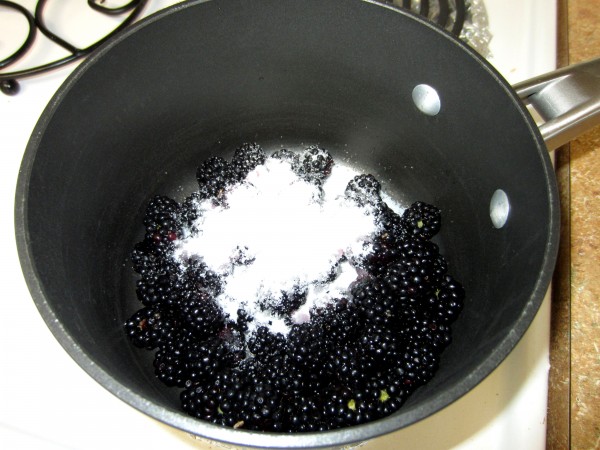 First step is to cook down the blackberries with some sugar. Then press half of the berries to remove the seeds and keep the other half whole so there are still some blackberry chunks in your ice cream. Then let the mixture cool.

Then you make the custard ice cream base. Along with the usual ingredients of heavy cream, milk etc. it uses egg yolks (which are cooked through) to make it nice and creamy! Let that mixture cool.  Then mix the blackberry puree and ice cream base together (doesn’t it look so cool!) and churn it.

Then you enjoy the best ice cream ever!

Directions:
To make the blackberry puree, combine the berries and sugar in a medium saucepan over medium heat.  Cook, stirring occasionally, until the berries have released most of their juices and the juice has reduced a bit, about 10 minutes.  Scoop half of the mixture into a bowl.  Set a fine mesh sieve over the bowl and add the remaining berry mixture to the sieve.   Press the mixture through the sieve to extract as much pulp and juice as possible while removing the seeds.  Stir the blackberry mixture together, cover, and chill.

To make the ice cream base, combine the egg yolks and 1/4 cup of the sugar in a medium bowl and whisk briefly.  Combine the heavy cream, milk, salt and remaining 1/4 cup sugar in a medium saucepan set over medium heat.  Bring just to a simmer.  Slowly pour the warm milk mixture into the bowl with the egg yolks, whisking constantly.  Return the entire mixture to the saucepan and place over medium heat.  Cook, stirring constantly and scraping the bottom of the pan until the mixture thickens slightly and coats the back of a spoon (about 170-175 degrees F).  Pour the custard through the mesh strainer into a clean bowl or storage container.  Let cool slightly, then cover and refrigerate until completely chilled.

When you are ready to churn the ice cream, whisk the blackberry puree mixture into the ice cream base.  Add the mixture to an ice cream maker and freeze according to the manufacturer’s instructions.