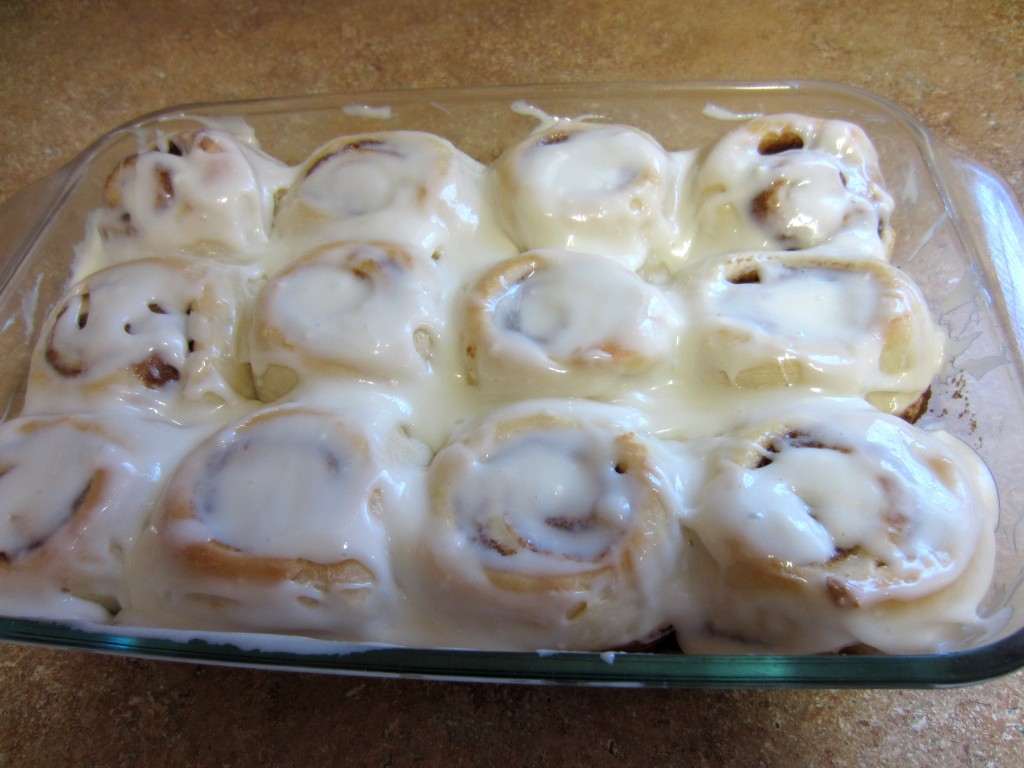 I’ve always wanted to make cinnamon rolls but never have. I was excited to finally try it and invited my new baking buddy over- my awesome sister-in-law Rachel. She just got married and loves trying new recipes with me.  I searched for quite a while for what I was hoping would be the perfect recipe. I like to get it right the first time. I decided on 2 recipes and put them together and it turned out to be the best cinnamon rolls ever! Oh yah!

These were super soft. I’ve had too many hard cinnamon rolls.  The cream cheese frosting was light and added the perfect touch. We shared these with quite a few people and I got some great compliments! These are awesome cinnamon rolls.

I was pleasantly surprised how quick these came together. I thought it’d be a lot of work but it really wasn’t. Let me show you… 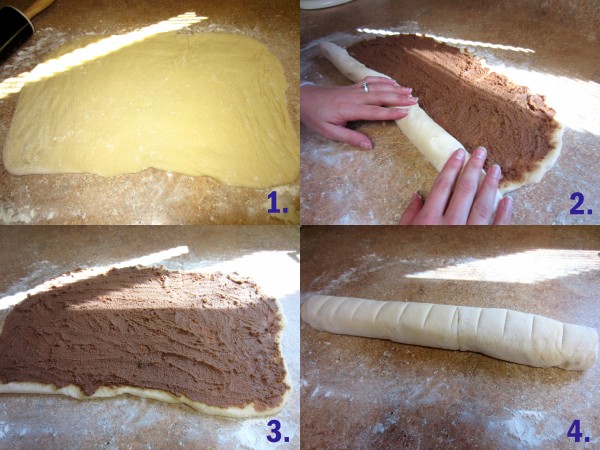 1. Make and knead the dough. (Using a stand mixer is a big help!) Then roll it out.

2. Mix together butter, cinnamon and brown sugar and spread on top of dough. (yum!)
3. Roll it up.
4. Make indentations to help you cut it evenly. 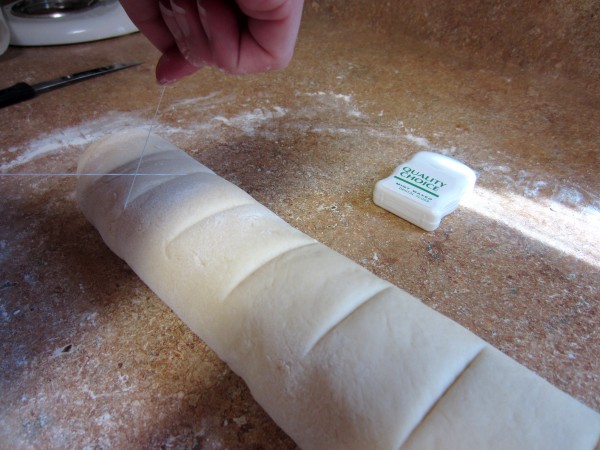 Next is a super fun trick. You use dental floss to cut it so it doesn’t squish it. It’s pretty awesome.  It doesn’t matter if you use mint, you won’t notice a taste. 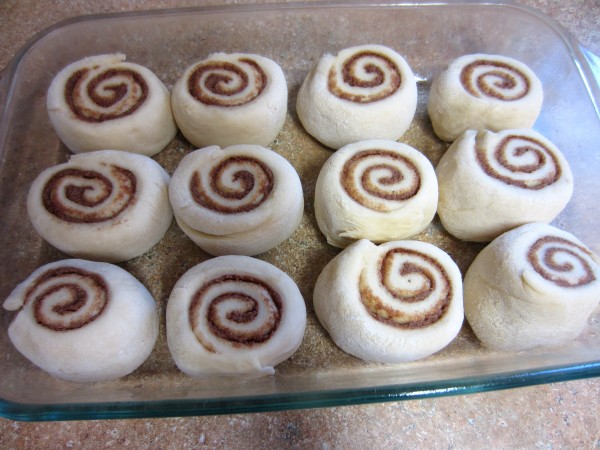 Then my favorite step! Place all the cinnamon rolls in the pan. What a gorgeous sight! 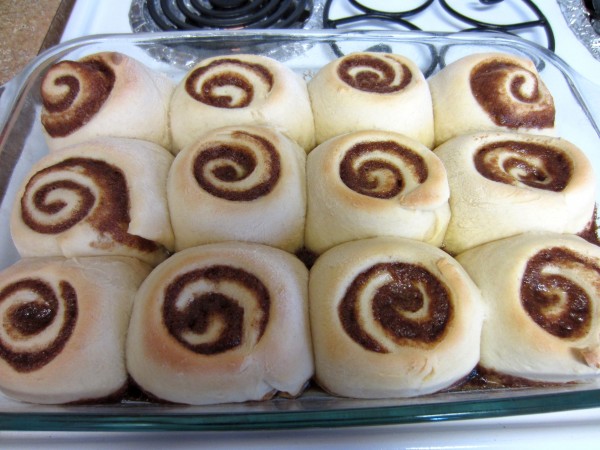 Let it sit for 30 minutes then bake it until golden brown. 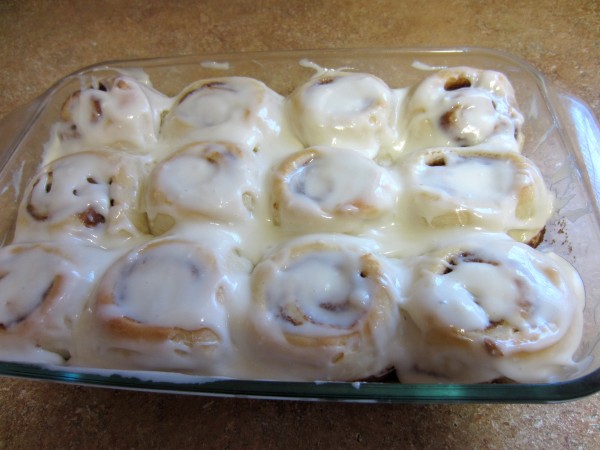 Then you make the frosting and pour it over. 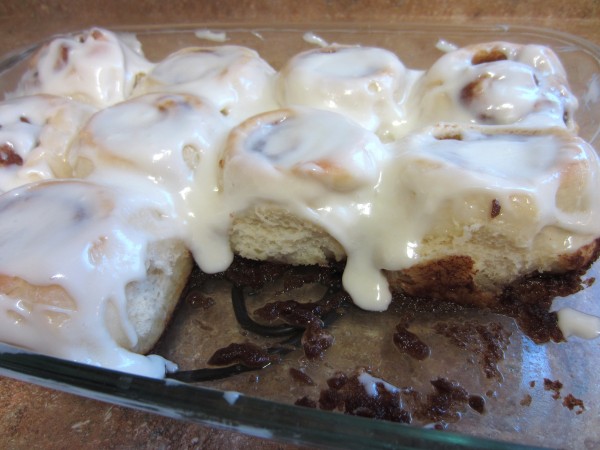 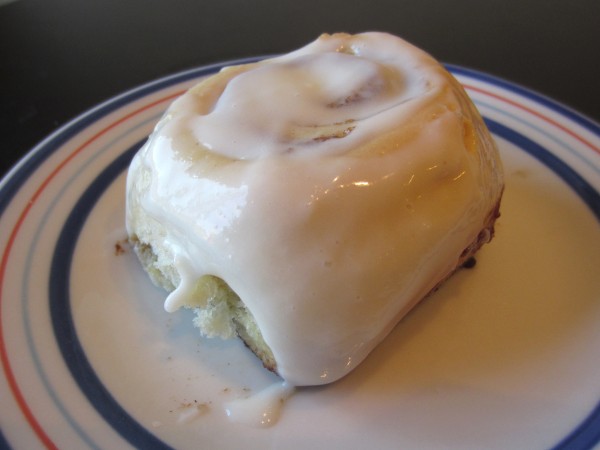 Dough: Place milk and 4 Tbsp. butter in a microwave safe bowl. Heat on high for 1 minute 30 seconds. Butter should be at least partially melted. Stir and set aside. In a large mixing bowl whisk together 2 cups flour, yeast, white sugar, and salt. When milk mixture has cooled to warm (not hot) add it to the flour mixture along with the egg while the beater (paddle attachment for those using a stand mixer) is running. Beat until well combined, about 1 minute. (Switch to the dough hook now) Add remaining flour only until dough barely leaves the sides of the bowl. It should be very soft and slightly sticky. Continue to let the dough knead for 5 minutes. If you are not using a stand mixer, turn dough out onto floured surface and knead for 5 minutes by hand. Turn dough out onto a floured surface and let rest for about 10 minutes while you make the filling.
Filling: Mix softened butter with brown sugar, cinnamon and salt.
Assembly: Roll dough into a rectangle about 12 x 14 inches. Spread brown sugar mixture over the surface and use your fingers or the back of a spoon to gently spread around. Roll up from the longer side of the rectangle and pinch edges closed. Score the roll into 12 equal pieces and then cut into rolls using floss. Place in a 9 x 13 pan that has been sprayed with cooking spray. Cover pan with a clean towel and let rise in a warm place for about 30 minutes. Preheat oven to 350 degrees. When rolls have finished rising, bake for 15-20 minutes or until light golden brown.
As rolls are cooling make the icing by whisking the cream cheese in a bowl of a stand mixer (or use a hand mixer) until creamy. Add the milk and whisk until combined.  Sift in the powdered sugar and whisk until smooth. Add the vanilla and whisk until incorporated. Spread over the rolls.
Makes 12 rolls.

Adapted from Our Best Bites and Food Network (Alton Brown)