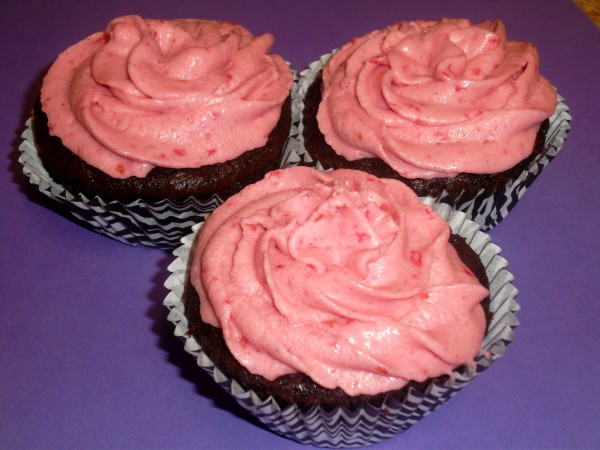 I come from a big family. I’m the youngest of 8 and all of us are married now and most have children.  We all live in Utah except for one brother and his family in Ohio.  Since there are so many people we get together every month or two to celebrate between 3 to 5 birthdays.  I’m usually the one in charge of the birthday cake, or cupcakes.  I searched on Pinterest for yummy ideas and came across this gorgeous and yummy cupcake recipe to make for our Labor Day birthday party.  Are you on Pinterest? I love Pinterest and probably have too many ideas from it now but it’s super fun.  You can follow me by clicking here.


The chocolate cupcakes turned out so yummy and soft.  They have both cocoa powder and chocolate chips in it making for some yummy chocolate flavor!  If you don’t have time to make the cupcakes, since it does take a long time, you could save some time by using a cake mix.  But you have to try the frosting!

The frosting was unlike anything I’ve had before.  It called for raspberries and lucky me I had just the right amount from Derek’s parents raspberry bush.  It came out so light and fluffly and so good. Derek says it tastes like the raspberry shakes his family always gets up by Bear Lake.  I also think the contrasting colors of the chocolate cupcake and raspberry colored frosting look so good and so yummy! I love that it uses real fruit and the beautiful color is creates.  This is a recipe I will for sure be using again. 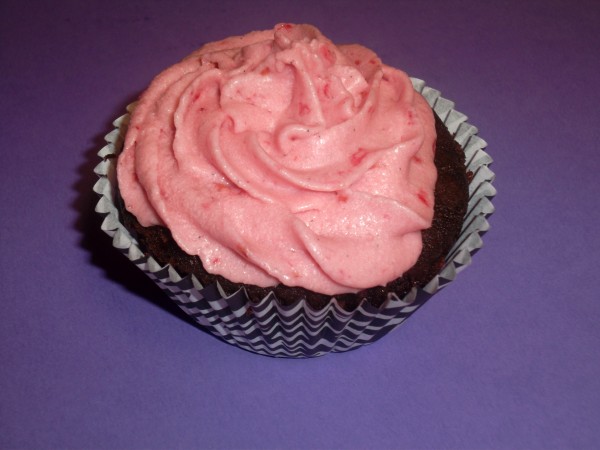 Chocolate Sour Cream Cupcakes with Raspberry Cheesecake Buttercream
Slightly adapted from Good Life Eats
Ingredients:
For the Chocolate Buttermilk Cupcakes:
1/2 cup semi-sweet chocolate
1 cup all-purpose flour
1 1/2 cups cake flour
1 1/2 cup unsweetened cocoa powder
2 tsp baking soda
1 tsp baking powder
3/4 tsp salt
3 large eggs
1 1/2 cups sugar
3/4 cup butter, softened
1 cup sour cream
1 1/2 cup milk
1 vanilla bean, seeds only (or 1 tsp. vanilla extract)
Raspberry Cheesecake Buttercream:
3/4 cup (1 1/2 sticks) butter, softened
1/2 cup (4 ounces) cream cheese, softened
4 – 4 1/2 cups powdered sugar, or until desired consistency is reached
5 ounces frozen (or fresh) raspberries, thawed and divided
1 vanilla bean seeds only (or 1 tsp. vanilla extract)
Directions:
For the Chocolate Cupcakes:
Preheat oven to 350F. Line muffin tins with cupcake cups or grease using nonstick cooking spray.
Melt the chocolate in the microwave, in 15 second intervals, making sure to stir in between. Set aside to cool down for a bit. Sift together flour, cocoa powder, baking soda, baking powder and salt. Set aside.
In a large bowl, beat the eggs and sugar for 5 minutes, until it is pale and thick. Add in the butter. Mix until combined. Add in the melted chocolate. Now, add in the sour cream and vanilla. Beat until well incorporated.
Add the flour mixture and milk in alternating increments and beat until smooth. Divide batter into the cupcake tins. This batter made about 30 cupcakes for me.
Bake for 18-25 minutes or until a toothpick comes out clean. Remove from oven and let cool.
For the Raspberry Cheesecake Buttercream:
Cream butter and cream cheese in electric mixer for 1-2 minutes until fluffy. Slowly add 1 cup sugar and beat until smooth. Add half of the raspberries and mix until combined. Add remaining powdered sugar, 1/2 cup at a time, and beat until well incorporated.
Add vanilla seeds and the remaining half of the raspberries and mix at medium-high speed until light and fluffy (2-3 minutes).
If needed, add more sugar as necessary to achieve proper consistency. Chill in the refrigerator for 30 minutes before frosting cupcakes if you’d like it to hold it’s shape. Pipe or spread onto cooled cupcakes.
« Tortilla Ham & Cheese Pinwheels (with a blue touch)
100th Post and a Giveaway! »