These cupcakes have a nice deep dark chocolateness to it that is just delicious! This is my go-to recipe when I am making cupcakes from scratch. They are sure to impress. The vanilla buttercream frosting is HEAVENLY! Every time I make this recipe with family around they all beg to lick the bowl when I am done. I am not joking! I mean it’s vanilla bean buttercream frosting! It’s light, creamy and has a lovely vanilla flavor that is to-die-for! Plus it’s so pretty with the flecks of vanilla you get from the vanilla bean paste.

I made these for a family birthday party yesterday.  Everyone loved it.  My sister said these were the best cupcakes she’s ever had.  I love it when I make something someone says is the best ever! 🙂  I was really excited to make these cupcakes with my new Christmas present.

Vanilla Bean Paste!  They always use vanilla bean pod’s on the Food Network but I have never seen a vanilla bean before so I didn’t know where I could buy it.  Then I saw this post on The Pioneer Woman’s website and was really excited I could start baking with vanilla bean paste.  I bought it at a cupcake shop in Orem (The Chocolate) but they also have it at Williams-Sonoma. (Update– I now buy it on Amazon, and last time I checked they don’t sell it at The Chocolate anymore.)
And now to the recipe… 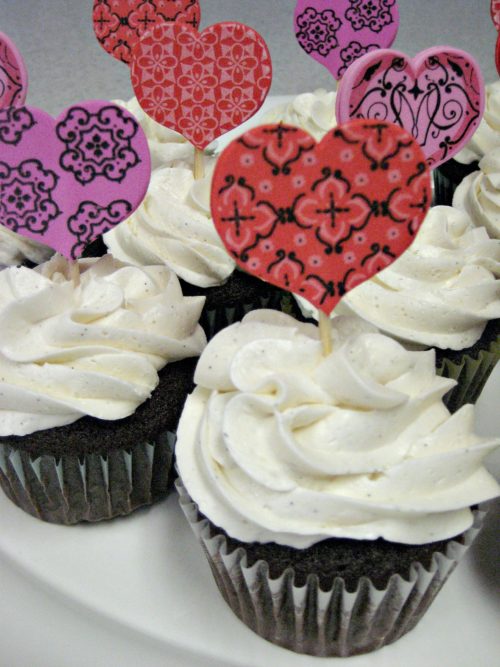