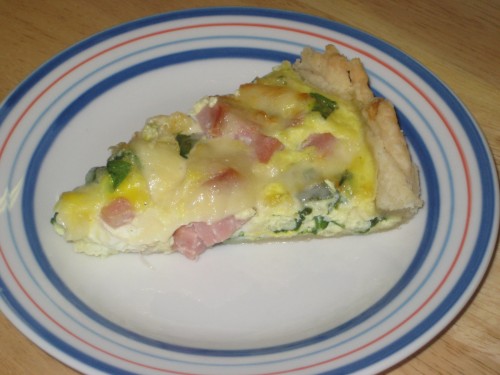 This is one of my most favorite things ever to eat for breakfast!  Like I said, I’m not crazy about eggs but I love them in this quiche.  This recipe also made me love spinach!  Since I first started making this quiche I’ve probably made it at least 10 times. Derek and I love it!  We are sad once it’s gone so I’ve started doubling the recipe so we are sure to have leftovers.

I’m considering making this for Christmas morning since last years breakfast was an absolute disaster!  My friend gave me a breakfast crock pot recipe to try. It sounded good so we put everything in the crockpot on Christmas Eve and were excited to wake up to a yummy breakfast. I woke up in the middle of the night to nurse Levi and it smelled really good. But when we woke up in the morning it smelled terrible. It had cooked too long! I was really sad because the recipe said to cook it for that long but maybe our crock pot cooks faster than others? Needless to say, I don’t think I’ll ever make a breakfast recipe ever again in the crock pot.

Anyway, back to the quiche. I promise you will love it!  I make my own pie crust for it since it’s so easy but feel free to buy one. Whatever you prefer. It’s so good!